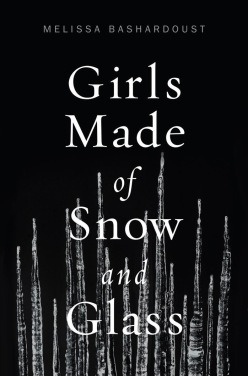 Title: Girls Made Of Snow and Glass

At sixteen, Mina’s mother is dead, her magician father is vicious, and her silent heart has never beat with love for anyone—has never beat at all, in fact, but she’d always thought that fact normal. She never guessed that her father cut out her heart and replaced it with one of glass. When she moves to Whitespring Castle and sees its king for the first time, Mina forms a plan: win the king’s heart with her beauty, become queen, and finally know love. The only catch is that she’ll have to become a stepmother.

Fifteen-year-old Lynet looks just like her late mother, and one day she discovers why: a magician created her out of snow in the dead queen’s image, at her father’s order. But despite being the dead queen made flesh, Lynet would rather be like her fierce and regal stepmother, Mina. She gets her wish when her father makes Lynet queen of the southern territories, displacing Mina. Now Mina is starting to look at Lynet with something like hatred, and Lynet must decide what to do—and who to be—to win back the only mother she’s ever known…or else defeat her once and for all.

Entwining the stories of both Lynet and Mina in the past and present, Girls Made of Snow and Glass traces the relationship of two young women doomed to be rivals from the start. Only one can win all, while the other must lose everything—unless both can find a way to reshape themselves and their story.

I want to thank Flatiron Books for sending a review copy of this book my way and also to Karina @ Afire Pages for hosting this PH blog tour!

I was in the midst of looking for my next anticipated reads for September and I saw this book, read the premise and fell in love with it. I was so stoked on reading this book as soon as possible and I was lucky enough to get an ARC from the publisher just in time also for the blog tour. There are clearly no words to describe how amazing this book was. I just love it so much that I am more than happy to talk about it every day to anyone who’s willing to listen to me rambling about my love for this book. I don’t know where to begin…

Frozen meets the classic fairy tale of Snow White, acclaimed to be a fantasy feminist fairy tale retelling! It was all I could ever ask for in a book, I was tearing through the pages as I was reading this book. I’m glad that the story was in dual perspective, we get to see the past events that lead to the present storyline. It was a perfect depiction of the fairy tale and the little girl inside me was rejoicing. I never thought that this book will make me so emotional. It’s pure perfection. That ending sent shivers down my spine and literally had me in tears. It’s so beautiful, t women empowerment in one book. The way how the Snow Queen’s and Snow White’s tale was told in this story was unique and refreshing. It’s like I’m reading a new kind of fairytale that represents feminism which we need more out in the book community.

I know some of you might find the story to be a bit slow because it’s character driven but you’ll never get bored of how good the author’s writing style is. We get to see Lynet and Mina’s character development all throughout this book which I am all for. These two characters just embody the power that was bestowed upon them, they showed how important feminism in YA fantasy books is! The story was focused on these two female leads who are fierce, smart and courageous. I wanted to see more of Winterspring but the author greatly provided a magical and whimsical imagery of this kingdom that left me in awe. I need to point out the family dynamics in this book, it felt real and yet heartbreaking at the same time. Growing up without any mother, the two girls were told to do certain things that they were against with by their fathers. I understood how both fathers had a different way of showing their love for their daughters.

What made me love this book more was the message it was trying to send out to every reader. Mina & Lynet stood up for each other. Mina’s a character that you hate in the beginning but love in the end because you’ll clearly understand why she did all those things. Sometimes it’s just accepting the fact that you care for a person, you’re just afraid of seeing the good in people because you’ve suffered and seen only the worse to people who you look up to. The love they had for each other was genuine. This book has shown me a whole new meaning of love the one you can’t hide behind snow and glass.

Feminism in YA and its Importance

Feminism has been a hot topic for who knows how long, and it’s creating a huge buzz around the YA community. It’s a good thing to be able to read books about strong women, badass women who stand up for their rights. To be honest, I haven’t read that much books that showcase feminism, but I am astonished about how vocal readers and writers are nowadays.

Why is it important in YA you might ask? We Need Diverse Books and Own Voices books movement is about creating a new perspective where all our voices are heard. Our abilities as human beings shouldn’t be held back by rules and norms. Feminism isn’t about who gets to be far more superior than other genders. Being a feminist shouldn’t affect the way you look, dress or even the people you go out with. It’s about giving women a choice, it’s about freedom, liberation, and equality. Being a feminist doesn’t mean that you’re a man hater or you’re there to throw down other women to be above them. It isn’t about telling women what to do, again it’s about them or any gender having the freedom to chose what they want to do.

I love seeing female characters who can stand up for themselves, fighting their own battles and handling every situation with their own will and strength. I repeat it doesn’t mean that when a female character is strong she has to have masculine features or attitude. It’s how she represents herself and her beliefs by standing up to people who try to bring her down.

This is just a light description of how I view Feminism in YA and Feminism in general. I haven’t delved into it much so I don’t know how to fully explain each context because I know it is a complicated topic to talk about but one thing’s for sure equality is important to be seen in real life and in the books that we read.

Don’t forget that there’s a giveaway of Girls Made of Snow and Glass on the tour! Enter here: http://www.rafflecopter.com/rafl/display/24842cbd7/