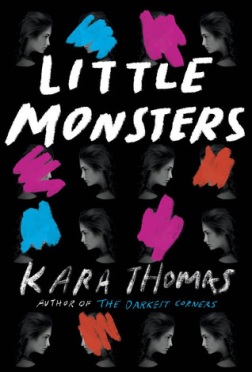 Kacey is the new girl in Broken Falls. When she moved in with her father, she stepped into a brand-new life. A life with a stepbrother, a stepmother, and strangest of all, an adoring younger half sister.

Kacey’s new life is eerily charming compared with the wild highs and lows of the old one she lived with her volatile mother. And everyone is so nice in Broken Falls—she’s even been welcomed into a tight new circle of friends. Bailey and Jade invite her to do everything with them.

Which is why it’s so odd when they start acting distant. And when they don’t invite her to the biggest party of the year, it doesn’t exactly feel like an accident.

But Kacey will never be able to ask, because Bailey never makes it home from that party. Suddenly, Broken Falls doesn’t seem so welcoming after all—especially once everyone starts looking to the new girl for answers.

Kacey is about to learn some very important lessons: Sometimes appearances can be deceiving. Sometimes when you’re the new girl, you shouldn’t trust anyone.

I want to thank Penguin Random House International for sending this book my way!

I’ve had the copy of this book for the longest time now and thank God I picked this book up for the Booktubeathon first challenge and in time for its release day!

As some of you may know I fell in love with Kara’s debut novel, The Darkest Corners! But I didn’t expect she’ll blow my socks off with her second novel. She just keeps better and better with her stories and her characters as well. Little Monsters is a gripping novel that has an intense storyline and incredible characters.

This is basically about a new girl in town who thought her life is all settled in but one event changed everything when Kayce and her friends together with her step-sister sneaked out and had a little “adventure” in the depths of the night. But after that everything changed.

I FREAKIN LOVE THIS BOOK SO MUCH!

The mystery part to it was on point never have I read something so straightforward and eerie at the same time. I was like a sleuth trying to investigate who was the one responsible for everything that’s happening. This book just kept me going, I didn’t want to read it at night because I know I’ll be having a problem with sleeping. It kept me on the edge of my seat. I felt my heart racing in scenes that were so intense and I felt that I was sucked into the story! The revelation at the end really got me. All of the questions I had in mind were answered.

There were a lot of red herrings that were thrown in different directions. Every evidence was literally circling everyone and I had no idea who was the culprit until I was at the end of the story. The narrators were unreliable. As I was reading their POVs I myself don’t know who to believe at some point, all the events that happened and the twists were mind-blowing. This has a potential to be a movie!!! *keeping my fingers crossed*

It’s a wonderful masterpiece by one of my favorite authors. Here it is, everything I could ask for in a mystery thriller book! The way Kara writes keeps me loving her books more. Do I recommend this? YES!!!